Little is known about the early history of Wickford, but the Roman invaders left their mark.

Like its neighbour, Billericay, the town of Wickford was inhabited in prehistoric, Roman and Saxon times - evidence being found during excavations at Beauchamps Farm.

Roman period floors with associated pottery and metal work and nearly 200 coins dating back to Mark Antony and the Roman Emperor Valentine were uncovered.

Wickford in Rhode Island USA is said to have got its name from the Essex town after a woman called Elizabeth Reid married a Governor of Connecticut, John Winthrop.

The movement of people out of London at the end of World War II had a large effect on Wickford, which is conveniently situated in the commuter belt. But previous to the 20th Century Wickford was just a typical Essex agricultural village with the land providing a living for many people who lived there.

Little is known about the early history of Wickford, but the Roman invaders left their mark the old Roman settlement now lies buried under the houses at the bottom end of Beauchamps Drive. 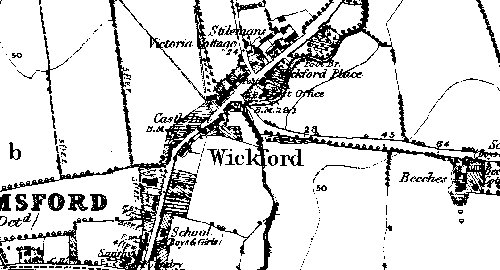