CORONAVIRUS (COVID-19) - Basildon Council service and information updates
Latest national COVID-19 restrictions announced on Monday 4 January 2021; Coronavirus cases are rising rapidly across the country. To reduce the spread of the virus, the whole of England has entered a national lockdown with immediate effect. Restrictions will be put into law later this week.
Read more

The first recorded name for Billericay appeared in 1291 as 'Byllyrica', although there were many variations of the name throughout the Middle Ages.

There once was a Roman fort at Blunts Wall. Unfortunately no trace of the four acre site can be seen today, but many Roman coins dating from between AD 69 and AD 636 have been unearthed together with a collection of pottery.

The Roman settlement was destroyed completely thanks to the efforts of the Saxon invaders. They set up home at 'Burghstede' (Saxon for a fortified place). It has been suggested that the fort was on the site now occupied by Great Burstead Church.

Prior to the Norman conquest 'Burghstede' belonged to Inger and what we now know as Little Burstead was part of Earl Godwin's estates. He was the father of King Harold. Many Saxon coins of the period have been found in Billericay and Burstead.

Following the Norman Conquest, Great and Little Burstead passed to Bishop Odo and when he fell into disgrace they were forfeited to his half-brother, King William. They were then given to the Cistercian Monks of Stratford.

Billericay itself was not mentioned in the Domesday Book as it was incorporated into Great Burstead. When the land was divided into Hundreds the Bursteads came under the Hundred of Barstable. Billericay was in fact part of the Parish of Great Burstead until the 19th century.

The first recorded name for Billericay appeared in 1291 as 'Byllyrica', although there were many variations of the name throughout the Middle Ages.

There were numerous inns in Billericay during the 13th and 14th centuries, including one called the Red Lion. Canterbury pilgrims would stay overnight in the town before journeying on to Tilbury where they would cross the Thames.

In the 14th century Billericay acquired a Chantry Chapel. The people of Billericay often had difficulty in reaching the parish church at Great Burstead in bad weather and this put an end to their two mile trek on extremely muddy roads.

Billericay men joined the Peasant's Revolt against taxation in 1381 and when the rebels were pursued by the King's armies they fled to Norsey Wood where they were killed. It is believed that some of these men are buried at Great Burstead.

Around this time Billericay fell under the influence of the Wycliffe preachers and the people became deeply entrenched in the new religion. In fact, six local people were burnt at the stake for their faith during the reign of Queen Mary.

Although Billericay was a flourishing commercial centre during the reign of Henry VIII, religious persecution led some inhabitants to embark on the famous Mayflower voyage. The expedition was led by Christopher Martin, who is believed to have lived in what is now known as the Old Chantry in Billericay High Street. Sadly, he perished along with his wife Marie, Solomon Prower and John Langerman shortly after their arrival at Cape Cod, Massachusetts. But this did not deter other Billericay inhabitants from setting sail for the New World and the town of Billerica, Massachusetts, was established in 1655.

Many businessmen built fine houses in Billericay at this time and a fine example of Georgian architecture can be seen in Burghsted Lodge. This was the period when highwaymen found rich pickings on the road from Billericay to Tilbury and it was to Billericay's advantage that many considered it safer to stay at one of its many inns than to risk being robbed. In fact, the Crown Hotel, then in the High Street, was listed as a coaching inn in the equivalent to today's AA Guide. 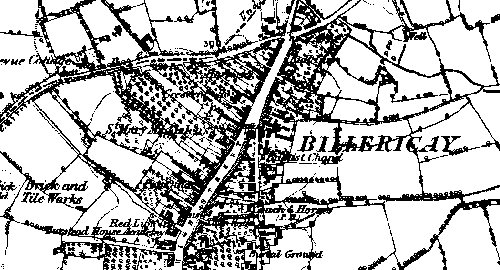