CORONAVIRUS (COVID-19) - Basildon Council service and information updates
Latest national COVID-19 restrictions announced on Monday 4 January 2021; Coronavirus cases are rising rapidly across the country. To reduce the spread of the virus, the whole of England has entered a national lockdown with immediate effect. Restrictions will be put into law later this week.
Read more

The name of Basildon is of Saxon origin meaning 'Beorhtels Hill', but the history of the district goes back to the early Stone Age.

Thousands of years ago the early inhabitants of the area were roving bands of hunters. Evidence of their existence, in the form of tools and weapons, has been unearthed in the past century.

Bronze Age inhabitants left ample evidence of their settlement in the area and some years ago a Bronze Age axe was found at Vange.

Sites of more permanent Iron Age settlements have been excavated at Wickford, Billericay, Langdon Hills and Basildon New Town. Large settlements have also been identified at Ramsden and Downham which were continually occupied from 550-150 BC.

During four centuries of Roman occupation, the surrounding countryside and its inhabitants became Romanised. Roads were built, new towns founded and local industries became organised. But in AD 412 the Romans withdrew their Legions to defend the Empire in Gaul and Britain was left to defend herself. In the 4th century the Essex coast was invaded, this time by Saxon raiders. The country was soon overrun when Saxon raids intensified and all vestiges of Roman civilisation in Eastern Britain were destroyed - the beginning of the 'Dark Ages'.

The Saxons favoured settlement away from Roman towns, so it is possible that the Basildon area became important at this time. It's said that Sebert, first King of Essex (King of the East Saxons), lived at Burstead and that even London (at the time a desolate ruin), was part of his kingdom. In AD 604 the heathens were converted to Christianity by Mellitus, Bishop of the East Saxons, Pope Gregory's emissary to Britain. In the early Saxon period the local villages as we know them today began to take shape.

The surrounding countryside was ravaged by the Danes from AD 800 onwards. They sailed into the creeks and rivers which abound in this area, the River Crouch probably being navigable as far as Wickford. Skirmishes grew into battles as resistance became more organised and a party of Vikings were defeated at Benfleet in AD 894 after trying to loot the Basildon area.

With the arrival of William the Conqueror in 1066 we come to the Domesday Book where Basildon is mentioned several times.

Sven the Sheriff, a Norman, held many lands in the county. He lived at Rayleigh Castle and was known as Sven of Essex. Odo Bishop of Bayeux, was half-brother to William the Conqueror, but was imprisoned after plotting to become Pope.

Perhaps the most colourful Norman personality in these parts was Turold, another land-holder. Not wishing to be outdone by the bishop, for whom he also acted as under-tenant at Vange, he grabbed as much land as he could within the county.

Odo is thought to have commissioned the Bayeux Tapestry.

He is remembered as the most unscrupulous of all Norman landlords and the proceeds of his misdeeds paid for the defence and comfort of his castle at Rochester. Turold's portrait appears on the Bayeux tapestry and so we have a picture of our first Norman landlord.

The Black Death of 1388, combined with the change from agriculture to sheep farming, brought about a general decline in the population of Essex villages, which may be why the hamlet of Basildon never seemed to grow.

Many Essex men joined the lronsides during the Civil War and a grim reminder of those days is represented by the clock face on a large house at Burstead. 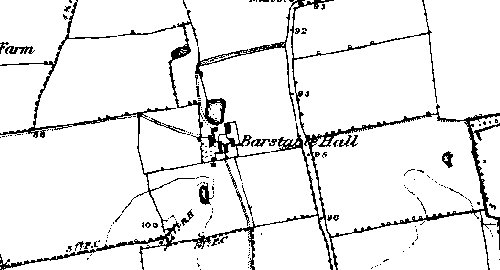