Basildon's rich cultural heritage has been added to in the form of a new permanent display of public art in Basildon town centre. 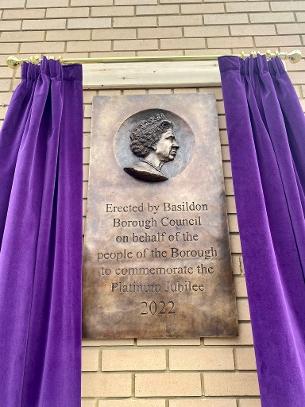 A Bronze relief of HM The Queen has today been unveiled on the outside of The Basildon Centre, being designed locally by born and bred Basildon sculptor Aden Hynes.

The sculpture is in commemoration of the Queen's Platinum Jubilee, and features a portrait of the Queen, with associated wording to illustrate its link to the Queen and the Jubilee.

The unveiling of the sculpture and the associated commemorative plaque took place Monday 30 May, being unveiled by The Lord Lieutenant of Essex in a ceremony with the Mayor, senior councillors, local MP's, and residents in attendance.

Cllr Andrew Baggott, Leader of Basildon Council, said: "The bronze relief of HM The Queen will be a poignant tribute to mark the historic occasion of the Platinum Jubilee for years and years to come. With the Man Aspires artwork and the lenticular screen recently being erected onto East Square's new cinema, it will add to the fantastic art within Basildon town centre created by Basildon people."

Mayor of Basildon, Cllr Luke Mackenzie, added: "Basildon has a longstanding connection to the royal family since the birth of our town back in 1948. We have had lots over the years that has caught the attention of the royals. I'm sure they would be delighted with our new artwork sitting proudly outside of the Basildon Centre - very near the bell tower, which was itself opened by Her Majesty in 1999. I hope they would be proud of our jubilant celebrations across the borough for this year's Jubilee too."