Norsey Wood nature trail will take you through this fascinating 'time-scape' and allow you to experience the ever-changing environment of this ancient place. 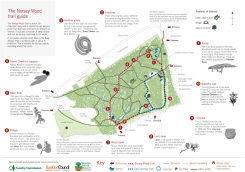 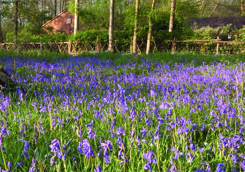 Norsey Wood Local Nature Reserve is steeped in history and the diversity of its wildlife make this 175 acre site unique.

Due to the sites history and wildlife the wood has been designated as a Scheduled Ancient Monument and a SSSI.

Some Circular Countryside Walks and Nature Trails incorporate Public Rights of Way in their routes. Public Rights of Way most often follow ancient footpaths and should be clearly marked. Where a Public Right of Way crosses privately owned land, walkers are expected to stick to the path and exercise due care and consideration.

See Public rights of way enforcement for further information and to report any problems encountered when using a Public Right of Way.

The trail is a circular walk which starts at the Information Centre. At a leisurely pace, it takes about one hour to complete. The route is marked by numbered trail markers situated along the path to correspond with the map.

There are a number of steep slopes in the valley areas and seats are provided along the way. In summer the trail is usually dry under foot but in wetter conditions the paths may be muddy and therefore you are advised to dress accordingly.

An Easy Access Trail is also located in the wood and a leaflet about it can be picked up at the Information Centre.

There are three ponds in this northern section of the wood which contain valuable communities of aquatic life.

The pale pink flowers of the water violet can be seen covering the surface in early June along with bog-bean and skullcap around the margins.

Also look out for damsel and dragonflies with their whirring transparent wings and brightly coloured bodies.

The network of trenches, dating from the First and Second World Wars, stretch from the north to the south of the eastern part of the wood. They were dug by the London Defence Volunteers who used this long stretch of the large medieval wood bank as part of the inner London defence line.

During the Second World War the wood was also used for army manoeuvres and ammunition storage.

Look out for smooth and palmate newts which can often be seen floating in the flooded ditch next to the first bridge during Spring time.

This area was planted to increase the amount of hazel in the wood after the 1987 storm. Clusters of brown nuts in Autumn help identify this plant along with the distinctive long yellow male catkins which shed their pollen in February.

Heather has also developed on this site, where light is able to reach the woodland floor. The hazel is coppiced on rotation to produce a crop of rods and also to encourage the heather to spread.

The coppice rods can be used to make walking sticks, fishing rods and wattle hurdles.

This species of tree was introduced to Britain by the Romans and is quick growing on well-drained gravel.

Most of the trees were planted in the wood during the early 1800's but some of the old coppice stools you see are several hundred years old.

The tree responds well to coppicing and produces a crop of poles suitable for making products like fence posts.

The tree is also famous for the crop of nuts it produces in October. These are eaten by many creatures, including humans!

This ride may well have its origins in the Iron Age when it would have been used as a track to transport timber.

In certain areas the ride is now kept clear of overhanging branches so that light can reach the verges. This sunlight encourages wild flowers like garlic mustard, lesser celandine and red campion.

The valley area gives us a picture of a part of the wood which has not been heavily managed in the past due to the steep slopes.

This medieval boundary structure surrounded the wood until housing development affected the northern boundary in the 1930's.

Part of the boundary is called The Deer Bank and would have been at least two metres high, with a deep ditch on one side when it was constructed.

From 1825 to the 1930's larches were planted in the wood and this area is the largest remaining plantation. The trees are around sixty years old and were badly affected in the 1987 storm.

Several new trees have been planted in this area alongside some of the wind blown timber which provides valuable niches for wildlife like beetles, woodpeckers and fungi.

This Bronze Age burial mound was originally fourteen metres across and two metres high. In 1865 the mound was excavated revealing three clay urns containing the cremated remains of a Bronze Age person.

It is thought that the tribes of this period liked to bury their dead in upland areas and with the wood being ninety metres above sea level, this area may have seemed ideal.

Today the clearing is an excellent place to watch bats hunting for moths.

The broad verges of this pleasant ride provide an excellent habitat for all sorts of wildlife. Wild flowers and meadow grasses flourish in the sunlight and species like ragged robin, rosebay willow-herb and yellow archangel provide a good source of colour in the Spring and Summer months.

The wild flowers attract a variety of butterflies such as the speckled wood, orange tip and painted lady, which can often be seen drifting along the ride.

Remember, when walking in the countryside always follow the Countryside Code

Enquiries please to the Countryside Ranger, see contact details below...