In the news: Mayor of Basildon lays a wreath for His Royal Highness The Prince Philip, Duke of Edinburgh

On Friday 16 April, the Mayor of Basildon laid a wreath in memory of His Royal Highness The Prince Philip, Duke of Edinburgh, on behalf of all the residents of the borough. 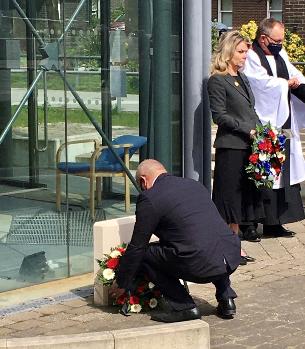 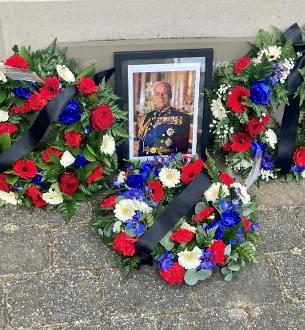 The wreath has been laid outside the Glass Bell Tower in St Martin's Square which was officially opened by Her Majesty The Queen who was accompanied by HRH The Duke of Edinburgh in 1999.

As a mark of respect and remembrance, whilst the wreaths were being laid, a bell in the Glass Bell Tower rang 99 times. This was followed by Rev Tim Brampton of St Martin's of Tours church leading a prayer and a one minute silience was observed by the Mayor and representatives of Basildon Council.

The Mayor of Basildon, Cllr David Burton-Sampson, said: "On behalf of the residents of the Basildon borough, I would like to express our deep sense of loss at the death of His Royal Highness The Prince Philip, Duke of Edinburgh.

"We give thanks for His Royal Highness's long and tireless service to his country and the commonwealth and the undeniable support he gave to Her Majesty The Queen as both her husband and consort.

Flags at the Basildon Centre will continue to fly at half-mast until Sunday and the Basildon sign is lit the royal colour of purple as a mark of respect and remembrance.