In the news: Wickford school children are cleaning up to support campaign

A group of Wickford primary school children donned hi vis jackets and litter pickers to carry out a clean-up exercise in support of the We're Cleaning Up campaign and Recycle Week. 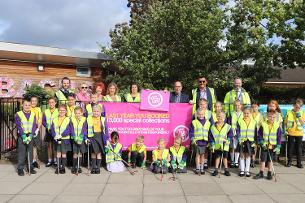 Basildon Council launched the campaign in the borough in August with the aim of uniting the whole community against the blight of dumped waste and litter.

The campaign, which will run until October 6, aims to raise awareness of enforcement action taken by the council, highlight what flytipping is and promote action taken by local communities to help keep neighbourhoods clean and tidy, with the overall aim of reducing levels of dumped waste and litter.

Headteacher at Abacus Primary School Mrs Heidi Blakeley said: "Rubbish and litter is something our pupils are passionate about and our school council regularly run litter picks during lunchtimes. We also collect crisp packets for charity and have recycling bins in all our classrooms. We're pleased to be supporting the We're Cleaning Up campaign."

Chairman of the Neighbourhoods and Public Spaces Committee Councillor David Harrison, said: "It's wonderful to see these young people getting stuck in and supporting this fantastic campaign.

"Alongside groups like the Wickford Wombles, who carry out regular litter picks, activities like this really send a strong message. We want this campaign to highlight the work our communities do in their own time to keep their areas tidy and for it to inspire others to do the same across the borough. Well done to all involved."

Leader of Basildon Council Councillor Gavin Callaghan added: "Well done to the pupils at Abacus for doing their bit and being a part of our campaign to make our borough a greener, cleaner place to live. This campaign is as much about taking pride in our areas as it is about reducing levels of dumped wasted and littering."

To find out more visit www.basildon.gov.uk/cleaning-up

If you would like to submit an idea to our High Streets and Town Centres clean-up fund and be in with a chance of getting funding email your proposal to highstreetcleanup@basildon.gov.uk